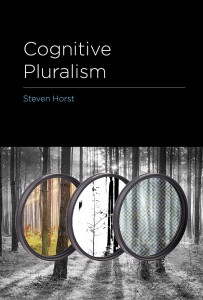 See Preview of TOC and Chapter 1

Philosophers have traditionally assumed that the basic units of knowledge and understanding are concepts, beliefs, and argumentative inferences. In Cognitive Pluralism, Steven Horst proposes that another sort of unit—a mental model of a content domain—is the fundamental unit of understanding. He argues that understanding comes not in word-sized concepts, sentence-sized beliefs, or argument-sized reasoning but in the form of idealized models and in domain-sized chunks. He argues further that this idea of “cognitive pluralism”—the claim that we understand the world through many such models of a variety of content domains—sheds light on a number of problems in philosophy.

Horst first presents the “standard view” of cognitive architecture assumed in mainstream epistemology, semantics, truth theory, and theory of reasoning. He then explains the notion of a mental model as an internal surrogate that mirrors features of its target domain, and puts it in the context of ideas in psychology, philosophy of science, artificial intelligence, and theoretical cognitive science. Finally, he argues that the cognitive pluralist view not only helps to explain puzzling disunities of knowledge but also raises doubts about the feasibility of attempts to “unify” the sciences; presents a model-based account of intuitive judgments; and contends that cognitive pluralism favors a reliabilist epistemology and a “molecularist” semantics. Horst suggests that cognitive pluralism allows us to view rival epistemological and semantic theories not as direct competitors but as complementary accounts, each an idealized model of different dimensions of evaluation.

“Horst provides a masterful, comprehensive defense of the idea that almost every part of philosophy changes once we recognize the importance of mental models for our cognition. Anyone working in philosophy of mind, language, or epistemology will need to engage with his ideas and arguments.”
—David Danks, Professor of Philosophy and Psychology, Carnegie Mellon University; author of Unifying the Mind: Cognitive Representations as Graphical Models
“In a series of impressive books, Steven Horst has been educating the philosophical community about how to think rigorously about cognition. In this volume, he sets out a comprehensive theory of cognitive architecture and cognition, scouting its implications for methodology in cognitive science, for epistemology, and for semantics. The account is meticulously anchored in important empirical work and is defended with rigor, clarity, and elegance of exposition. The pluralism Horst develops is highly original and runs against the grain of much contemporary systematic thought in philosophy of mind today about the structure of the mind. So much the worse for orthodoxy; Horst’s view is by far the most compelling and carefully articulated on offer.”
—Jay L. Garfield, Kwan Im Thong Hood Cho Temple Professor of Humanities, Yale-NUS College; Doris Silbert Professor in the Humanities and Professor of Philosophy, Smith College 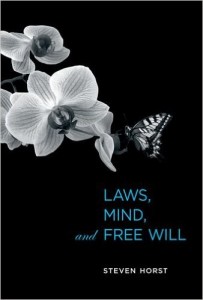 Laws, Mind and Free Will.

The assumption that the universe is governed by natural laws poses problems for our understanding of the mind.  This book examines two of these.  First,  it is often argued that, whereas the natural sciences employ strict laws, psychology and other sciences of the mind employ only ceteris paribus laws.  This, in turn is seen by some as threatening both the claims of these disciplines to be truly scientific and our commitment to the reality of mental states like beliefs and desires.  Second, the existence of physical or psychological laws would seem to imperil our assumption that we have free will.

I argue that both of these views are mistaken, and that the source of the mistake is to be found in a particular philosophical account of the nature of laws, made popular by Logical Empiricists in the 20th century.  This account of laws has suffered decisive criticisms within philosophy of science, and its major rival, the causal-capacities account, does not generate the same problems.

In addition to this main argument towards the dissolution of apparent problems, the book also contains an original Cognitive Pluralist account of laws and case studies in the types of law-like explanation employed in psychophysics, neural modeling and belief-desire psychology.

“Steven Horst’s *Laws, Mind, and Free Will* has both the clarity, scope, and scholarship needed for an excellent text and the original analysis appropriate to a significant contribution to the literature, especially on the topic of laws of nature. It will reward readers in philosophy of mind and cognitive science and provide advanced students with an excellent treatment of important literature.”
—Robert Audi, John A. O’Brien Professor of Philosophy, University of Notre Dame

“Start with a mix of powers, like mine or Mumford’s, and Giere’s perspectivism. Mix in a great deal of Horst. The result is a lovely pluralist view of scientific models and laws, a view that meshes neatly with the matching doctrine of cognitive pluralism that Horst develops from his detailed case studies and that leaves ample room for — but does not force — free will.” —Nancy Cartwright, Professor of Philosophy, London School of Economics and University of California, San Diego

One of the major debates in recent philosophy of mind has been about whether mental phenomena like consciousness and intentionality can be “reduced” to physical or neural phenomena.  Most philosophers have assumed that the phenomena of other special sciences (chemistry, biology) are reducible to physical phenomena.  As a result, they believe either that mental phenomena must be reducible to physics as well (probably by way of psychology and neuroscience) or else that the irreducibility of the mind is something unique to the mind, and makes it either different in kind from physical things (dualism), or else an object of suspicion (eliminativism).

Curiously, during this same period, philosophers of science have fairly decisively rejected the founding assumption of this debate: the assumption that inter-theoretic reductions are widespread in the sciences.  This book examines the consequences of post-reductionist philosophy of science for philosophy of mind, arguing that is creates problems for all of the familiar views of the nature of the mind.  It introduces a view called Cognitive Pluralism, which may help to resolve some of the problems raised.

“First, the book is exceptionally well written and very well organized. It is also, at times, funny in a wry, dry, and even subliminal fashion. I use this book in my classes and I think philosophy of mind would be greatly improved if it absorbed some of the lessons in Horst’s book. I know of no better book to reform and reinvigorate philosophy of mind than this one.….In spite of my differences with Horst over Cognitive Pluralism, I believe that his book is a true gem and a must read for everyone concerned about the fate of philosophy of mind.” – Michael Silberstein, Elizabethtown College and University of Maryland, Philosophical Psychology.

“Revealing the general failure of reductionistic strategies in science, Horst is successful in the long awaited task of bridging the gap between contemporary Philosophy of Mind and Philosophy of Science.” – Alfredo Pereia, Jr., Säo Paulo State University, Minds and Machines.

“Horst has undoubtedly provided a novel perspective on familiar territory, and the arguments he provides against traditional views in the philosophy of mind are deftly handled.”  – Richard Gray, Cardiff University, Analysis.

“Beyond Reduction is an important contribution to the contemporary discussion.  One might even say it is a necessary book.” – D. Gene Witmer, University of Florida, Notre Dame Philosophical Reviews. 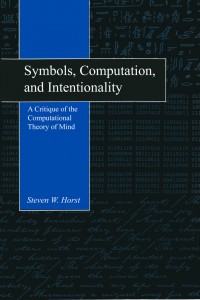 Symbols Computation and Intentionality: A Critique of the Computational Theory of Mind.

(Republished with new Preface in paperback and electronic formats 2011)

This book examines the Computational Theory of Mind, and its claim to explain the intentionality of mental states.  I argue that viewing the mind as a computer at most supplies an explanation of how reasoning can be achieved as a causal process, and cannot provide any explanation of why mental states have meaning.

A first-rate contribution to the literature on the foundations of cognitive science, philosophy of mind, and philosophy of psychology. It is clear, powerfully argued, highly original, and provides one of the best general critiques to date of the claims of the advocates of the computational theory of mind. – Jay L. Garfield, Hampshire College

A very substantial work, carefully done, directed at central issues in the foundations of cognitive science, and providing serious support for some unpopular conclusions. – Robert Cummins, University of Arizona

[Horst’s] surgical disentangling of the scientific value of CTM from its philosophical pretensions grounds an impressive, insightful, and well-supported account (consistent with, if not directly inspired by, that of Wittgenstein) of ordinary mental discourse and its relation to scientific explanation. – John Black, Review of Metaphysics

This book is original and lucid in its argumentation, and its defense of the conventionalist analysis of symbols is detailed and comprehensive. – Ausanio Marras, Philosophy and Phenomenological Research

I highly recommend this book to anyone…interested in cognitive science and the philosophy of mind. Those readers who…are suspicious of the very wide acceptance of token physicalism and of…naturalizing the mental will find useful suggestions for further projects in many of the things that Horst suggests. – Hans Müller, Minds & Machines